The Sony Reader PRS-T2 is an eBook reader with a 6 inch touchscreen E Ink display. It looks a lot like Sony’s last eReader, but it’s a little smaller and Sony has replaced the physical buttons below the screen with what appear to be touch-sensitive buttons.

J&R is taking pre-orders for the PRS-T2 for $130 — about the same price as the older PRS-T1 eReader.

Update: The order page has been removed. 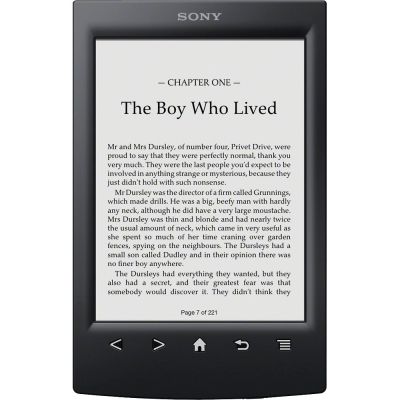 The eReader can run for up to 2 months on a charge, and Sony says the battery can be fully charged in about 2 hours. Battery life drops to 6 weeks with WiFi on.

It features 1.3GB of available storage for eBooks including TXT, PDF, and EPUB books with support for Adobe DRM. There’s also a microSD card slot for up to 32GB of additional storage.