Samsung makes some of the best-selling Android smartphones. But the company also offers a range of portable media players that run Android software. The biggest difference is that the Samsung Galaxy Player line of devices don’t make phone calls, while Samsung Galaxy smartphones do.

Now the folks at SamMobile have posted details of what they say could be the next Galaxy Player from Samsung. 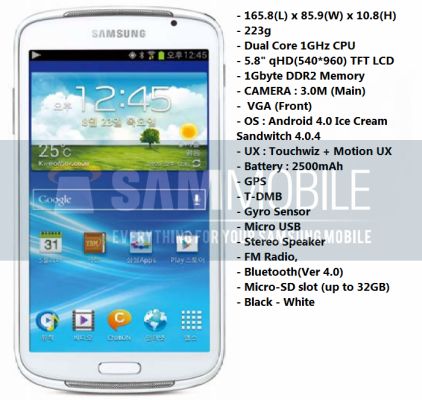 The Galaxy Player YP-GP1 reportedly features a 1 GHz dual core processor, a 540 x 960 pixel display, and Android 4.0 Ice Cream Sandwich software. SamMobile says the device has a 5.8 inch display, but some folks in the comments suggest it could actually be a smaller 4.8 inch screen.

Update: Nope. The Galaxy Player 5.8 officially has a 5.8 inch display.

Details about the new device also showed up recently at the glbenchmark website.

The new Galaxy Player reportedly has a 3MP rear camera and a VGA front-facing camera, GPS, FM Radio, Bluetooth 4.0, and WiFi. It has 1GB of RAM, a microSD card slot, and a built-in speaker.

Most of the details come from an anonymous tip, so take this news with a grain of salt. But Samsung has introduced a wide range of Galaxy Player devices over the past few years, and there’s nothing unreasonable about the specs for this model — .