Intel’s Next Unit of Computing, or NUC is a tiny desktop computer with an Intel Core i3 processor. It’s not much larger than small stack of paperback books, but packs enough power to function as a desktop PC, media center, or kiosk.

But if a Core i3 chip isn’t good enough, you might have some other option soon. A leaked product roadmap suggests Intel could soon offer models with Core i5 and Core i7 chips. 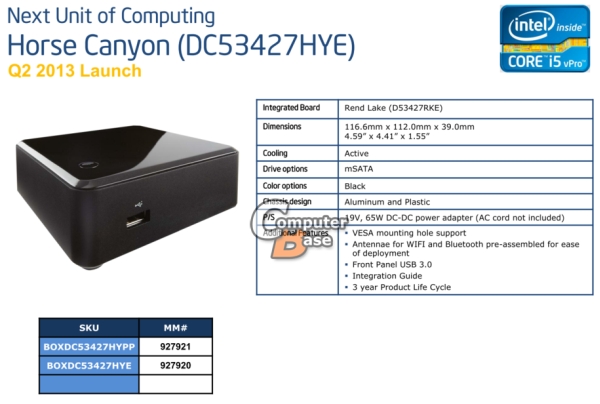 Computer Base.de reports that the Core i5 version is code-named “Horse Canyon,” while the Core 7 model bears the ominous name, “Skull Canyon.”

Both models use 17W processors originally designed for notebooks and ultrabooks, so they’ll use less power than typical desktop PCs (and generate less heat, which is important when your entire computer fits inside a 4.6″ x 4.4″ x 1.6″ case).

The Horse Canyon model has an Intel Core i5-3427U processor while the Skull Canyon version has a Corei7-3537U CPU.

Both feature support for mSATA drives, up to 16GB of memory, and optional WiFI and Bluetooth.

You can find more details at Computer Base.de.

This wouldn’t be the first time we’ve heard about NUC units featuring faster processors. Earlier this year Gigabyte announced plans to offer models with Core i5 and Core i7 chips.