You’d have to look pretty hard to find the performance difference between a netbook from 2008 and one from 2012. While Intel has been steadily reducing power consumption of the Atom processors for laptop and desktop computers, the company hasn’t really done much to boost overall performance, aside from adding support for HD video playback in recent years.

That could change with Intel’s upcoming Intel Atom Bay Trail chips. According to some leaked product slides from 3DCenter, the next-generation of Intel chips could offer up to twice the performance and 3 times the graphics power of previous Atom chips. 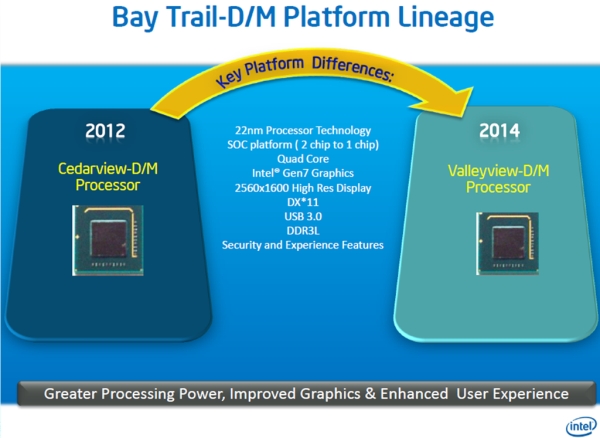 We’ve already seen some of the highlights of Intel’s upcoming “Bay Trail” processors, including:

The new chips will be based on a new “Valleyview” core which is a complete system-on-a-chip, unlike Intel’s earlier Cedarview platform which used two chips.

One of the biggest changes is support for out-of-order execution, which Intel says will make the new processors between 50 and 100 percent faster than Cedar Trail chips. The move to Intel HD graphics will also add support for DirectX 11 and screen resolutions up to 2560 x 1600 pixels.

While the netbook market isn’t what it used to be, Intel still sees a few different applications for its Bay Trail processors:

The tablet chips will be designed to use less than 3W of power, while the notebook chips will hit 6.5W and the desktop processors will use up to 12W.

None of these processors will offer the kind of performance you’d expect from an Intel Core i3, or the latest Celeron processors. But for the first time it looks like Intel is getting serious about giving its low power, inexpensive Atom chips a big performance boost.

The new chips are expected to go into testing early this year, and should hit the streets in early 2014.

You can find more sliders at 3DCenter.

via TechPowerUp and FanlessTech