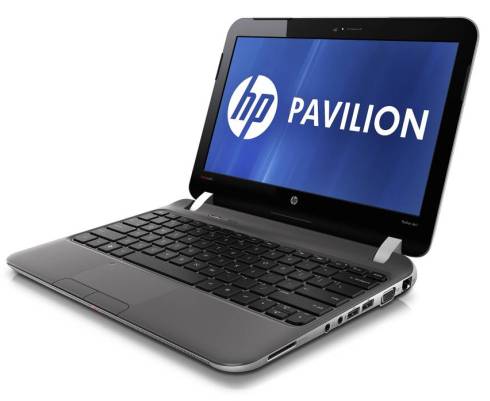 The HP Pavilion dm1 is a portable laptop with an 11.6 inch display. It’s a bit chubby by ultrabook standards, measuring 1.3 inches thick at its fattest point, and weighing about 3.5 pounds. But while ultrabooks are expected to cost as much as $1000, the HP Pavilion dm1 starts at just $399.

HP first launched the dm1 series earlier this year, but this month the company introduced a few new models, and the first of those new versions went on sale today.

The new models come with a slightly different case design. The battery now sits flush with the laptop case instead of sticking out of the back. The touchpad has also been redesigned so that there are now separate left and right buttons below the touch area. Earlier models had a single-surface click-pad, meaning you had to press down on the corners of the touch area in order to click.

The biggest changes though, are in the processor options. While the original dm1 came with a 1.6 GHz AMD E-350 processor, the new models are available with 1.3 GHz AMD E-300 or 1.65 GHz AMD E-450 chips. Next month HP will also offer a model with an Intel Core i3 ULV processor, but that model will be much more expensive, with prices starting at $599.99.