The folks behind the Eve V tablet that started shipping in 2017 (and then ran into some speed bumps) are gearing up to launch their second tablet.

But the design and features for the Eve V gen 2 haven’t been finalized yet — because unlike most PC makers, Eve solicits community input through its forums and incorporates that into the design.

Now Eve has narrowed things down to three concept designs: Powerhouse, Workhorse, and Better Up. The company has posted some renderings showing what each model would look like, and is asking the community to vote on their favorites. 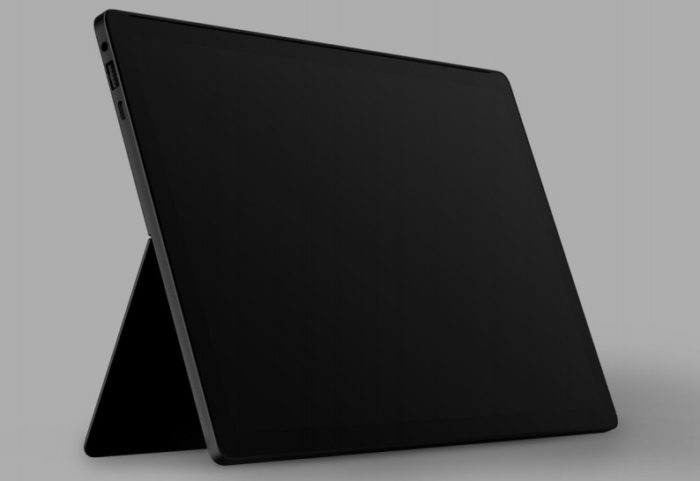 This concept is similar to the original Eve V, but features upgraded specs.

We’re looking at a slim tablet with an aluminum body, a built-in kickstand, front-facing stereo speakers, USB Type-C and Type-A ports, front and rear cameras, an SD card reader, and a headset jack. There’s a fingerprint reader in the power button.

Eve has increased the antenna area to help with performance for optional LTE and GPS features. And you can still upgrade the SSD by opening a slot hidden beneath the kickstand.

This version would keep all of those features, but most ports are now on the bottom of the device, the heat dissipation has been enhanced, the buttons are more visible, and the tablet is easier to upgrade and repair thanks to a couple of screws that you can remove to open the whole thing up by releasing the screen from the tablet.

This model uses a mostly plastic design for improved wireless performance and reduced weight (although there is still metal on the back of the tablet to help dissipate heat).

The Better Up concept also has a set of removable panels on the back that you can open up with a screwdriver to access the internal components.

All three versions of the tablet are expected to feature a 12.3 inch display with a 3:2 aspect ratio, a kickstand, and support for a detachable keyboard.

Eve hasn’t yet revealed any details about the processor, GPU, or other specs.

But you can weigh in on what you’d like to see from a premium tablet at the Eve Community forum.

Another thing to keep in mind — Eve’s first tablet was a pretty good device… if you could get your hands on one. But the company did run into some trouble when it came time to actually ship the product. The company says it has a new manufacturing and shipping partner which should make things go more smoothly this time around, but it’s probably a good idea to proceed with caution if you’re thinking about ordering an Eve V gen2 tablet when they go on sale sometime later this year.