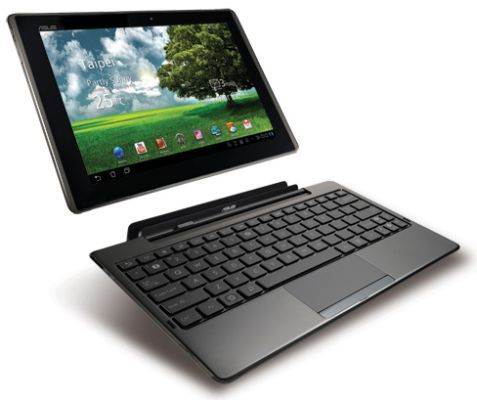 The Asus Eee Pad Transformer is one of the top-selling Android tablets. That’s probably at least in part due to the fact that the $399 device is the cheapest 10 inch tablet available with Google Android 3.x Honeycomb. The optional $150 keyboard dock which nearly doubles your battery life and lets you use the tablet like a laptop probably doesn’t hurt either.

Initially Asus had a hard time producing enough of the tablets to keep up with demand and the Transformer was in short supply at most stores. Now that production has ramped up significantly it’s not as tough to get your hands on a Transformer, but an Asus rep I spoke with last night said that stores are still running out of stock a few days after getting in new shipments. He says that the keyboard dock is also selling at a brisk pace.

While the Asus Eee Pad Slider with a pull-out keyboard (instead of a separate keyboard accessory) is due out this summer, Asus plans to continue offering the Transformer for the foreseeable future as well.

But according to DigiTimes’ sources, Asus is also working on the next version of the tablet. It will likely have an NVIDIA Tegra quad-core processor and run Google Android Ice Cream Sandwich. That’s the version of Android set to follow Honeycomb, and it will be the first version of Android designed to specifically run on both phones and tablets.

DigiTimes says the new machine will be released in October or later.

As an interesting sidenote, the DigiTimes article may explain why so few other companies are offering tablets as cheap as the Eee Pad Transformer. Industry sources reportedly suggest that the Eee Pad is actually being sold for about what it costs to make the tablet. Asus makes a higher profit on the keyboard docking station.

3 replies on “Next-gen Eee Pad Transformer in the works”