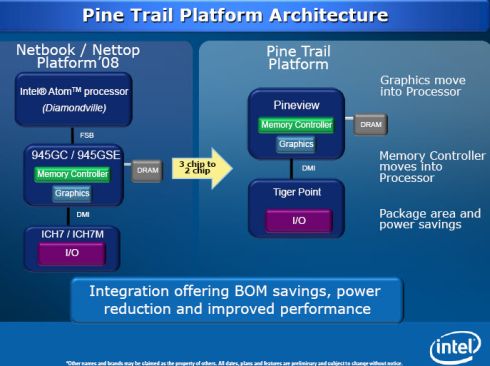 More details are emerging about Intel’s next-generation Atom processors, codenamed Pineview. Fudzilla has a series of reports on the upcoming Atom chips. First, the site reports that both the new chips will dissipate heat better than today’s Atom chips, which will allow nettop computers using the new Atom processors to be passively cooled. In other words, no noisy fans.

The processors won’t likely offer much of a speed or performance boost over today’s models. But in addition to generating less heat, they’ll use less power. At the same time, Intel is packing in support for 800MHz DDR2 RAM (currently only 667MHz or slower RAM is supported) and a faster DirectX 9 graphics core. Fudzilla reports that LCD displays on these models will likely be limited to 1366 x 768 pixels or less, but you should be able to plug in a 2048 x 1536 monitor via a VGA port.

Finally, Fudzilla reports that Intel is working on a reference design that will allow PC makers to bundle Pineview chips with third party HD video decoders. This shouldn’t come as a huge surprise, since it’s clear that today’s Atom chips are capable of handling some 720p video but choke on 1080p video. Since Intel is focusing on increasing efficiency in the next generation Atom processors rather than boosting performance, bundled graphics chips seem like the way to go. And we’re already starting to see companies like HP offer solutions including the Broadcom Crystal HD Enahanced Media Accelerator. Of course, NVIDIA has their own ideas for this space, and is pushing its ION platform which bundles an Atom chip with a much more powerful GeForce 9400M graphics processor which can handle not just HD video, but also a number of modern video games.

One reply on “Next-gen Atom chips will be cooler, offer better graphics”