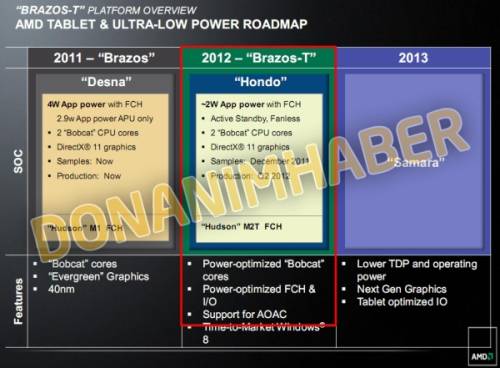 AMD just introduced its new Desna chip for tablets last month, but Turkish web site DonanimHaber has obtained leaked slides with details about a new low power tablet chip from AMD due out in 2012. The new chip is code-named Hondo, and the company plans to have it ready to go by the time Microsoft launches the Windows 8 operating system.

The Hondo chipset will feature a dual-core processor with a 4.5TDP. But the slides suggest it has a lower “app power” of about 2 watts. The 40nm processor will include Radeon HD 6250 graphics and will be able to handle 720p HD video playback and DirectX 11 graphics. But the low power chip is designed for use in fanless computers which means it won’t generate much heat.

According to the leaked slides, AMD will send samples of Hondo chips to hardware partners in December with the processor expected to go into production in the second quarter of 2012.