Nearly three years after running a crowdfunding campaign for a laptop dock powered by your smartphone, the folks at NexDock are back for another round.

The NexDock 2 has a better screen, a more compact design, and an aluminum body (rather than plastic).

You can connect a smartphone by running a cable to the USB-C or HDMI inputs on the NexDock 2. It can also work with a Raspberry Pi or other mini PCs.

NexDock has launched a new Kickstarter campaign for the NexDock 2 and plans to begin shipping the laptop dock to backers in September. It will have a retail price of $279, but backers of the crowdfunding campaign can reserve one for $179 and up. 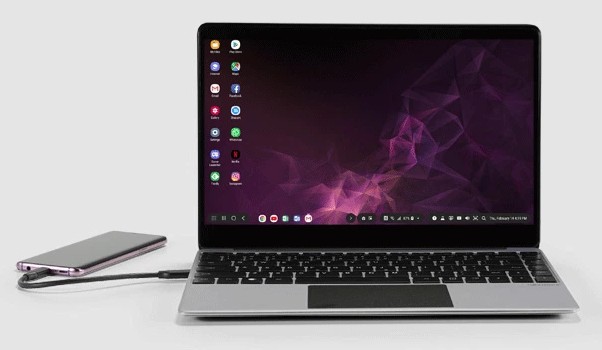 While the NexDock looks like a laptop, it doesn’t have its own CPU, memory, storage or operating system. It’s basically a dumb display, keyboard, touchpad, and battery that’s driven entirely by your phone.

It has a 13.3 inch, 1920 x 1080 pixel IPS LCD display which lets you see your smartphone apps on a bigger screen. There’s a full-sized keyboard which should make text input easier. There are quad 1 watt speakers, which probably sound a bit better than the speaker(s) on your phone. And there’s a 38 Wh battery that will help keep your phone’s battery from running down while it’s connected.

The system has a USB 3.0 Type-A port, a 3.5mm headset jack, a microSD card reader, an HDMI input, and three USB-C ports:

The NexDock 2 measures 12.5″ x 8.5″ x 0.6″ and weighs about 3.1 pounds. It’s not much lighter than a typical 13.3 inch laptop, but with prices running between $179 and $279 it’s a bit cheaper than most… and since it uses your phone for just about everything, it’s effectively a 4G-enabled device that doesn’t need any special software to keep files synchronized between your laptop and phone (because everything’s running on your phone).

NexDock says the hardware is compatible with Samsung’s DeX platform, which means that if you connect a recent Samsung Galaxy smartphone you’ll be able to use Android as if it were a desktop operating system with a taskbar and multi-window support. Samsung’s Linux on DeX even allows you to load a full-fledged desktop Linux environment.

I suspect if you have compatible hardware you should also be able to use alternate software such as Maru OS, Ubuntu Touch, or OXI to supply a desktop-like experience.

In related news, the folks at NexDock had announced 2017 that it was developing a device that would use Intel’s Compute Card for its brains rather than a smartphone. But now that Intel has pulled the plug on Compute Card development, NexDock says it’s putting plans for that device on hold.