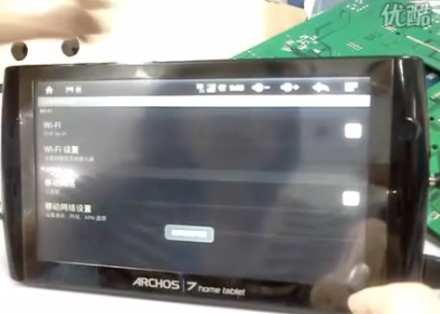 Update: As several people have pointed out in the comments, it’s not entirely clear if we’re looking at an Archos prototype, or an Archos tablet that’s been hacked to demonstrated some new Chinese hardware.

First the good news — it looks like Archos maybe working on an updated version of the Archos 7 Home Tablet that’s capable of running Google Android 2.1. The bad news? It looks like the new model features a new processor — which means Android 2.1 may not officially be made available for existing Archos 7 users.

The new version of the tablet apparently has a Rockchip RK2818 processor, and in a demo video posted on CNBeta, you can see that it’s running a version of Android 2.1 with Rockchip branding, rather than Archos branding. But the hardware clearly says Archos 7 Home Tablet, so this may be an early development device.

In addition to running Android 2.1, the video shows that you can pair a 3G modem with the device with a USB adapter.

The demo video also shows off Google Android Market, but I suspect it will be dropped by the time the tablet is made available for purchase in the West…

Of course, with Archos launching 5 new Android tablets including a new 7 inch model, it’s not entirely clear why the company is designing a new version of the Archos 7 Home Tablet — so maybe this tablet won’t be made available in the US anytime soon anyway.

via Android Tablets and Engadget Chinese