At Google I/O today the company announced several updates and enhancements to Google+, including a bunch around photos. Now when you upload images to the social network you’ll get access to a bunch of tools for enhancing them as well as more space for full size storage. It’s not as extensive as Photoshop or even Photoshop Express, but these tools should make photo tweaks easier for non-professionals. Since they’re all web-based, you can access them from any browser, including Chrome. Though Vic Gundotra didn’t connect the two, this does provide Google Chromebook owners some advanced photo editing, one of the missing features of the Chrome OS ecosystem. 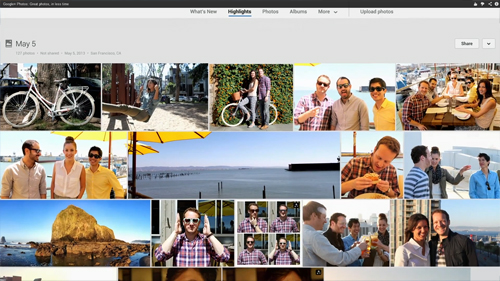 Google+ already gives users 5GB of storage space for full-size images and unlimited space for smaller sizes, today they upped that first number to 15GB in an effort to encourage people to use the social network as a photo storage locker for the images they take with better cameras.

If you’re a huge photo buff or just like to upload every single picture from a vacation, the new Highlights feature will make it easier to to go back through them. Highlights will cull the less than awesome pictures from a group and only serve up those that are most interesting, beautiful, and contextually desirable for you (family, friends, monuments, etc.). This is very similar to the Everpix service and looks like it relies on similar technology and coding on the back end. To find images to highlight, Google’s servers eliminate blurry pics, duplicates, those with bad exposure and other flaws.

Low-end point-and-shoots and smartphone cameras are often the sources of said blurry, badly exposed images. If you want to save a picture that’s almost great or even make an okay picture better, there’s an Auto Enhance button. This reduces noise, softens skin, sharpens, and more. It utilizes advanced facial recognition software among other things to analyze photos and decide what to apply.

Google also added something called Auto Awesome. This adds fun stuff to pictures or creates something interesting from connected groups. If the software recognizes a person in multiple photos, Mix will create a collage. Tried to get a group shot but never did get one where everyone is smiling? Smile will combine them into one where everyone is. Motion find burst shots and makes an animated GIF. (Clearly someone has been talking to the folks at Samsung…) Awesome also includes Pano and HDR. The effects won’t eliminate the source photos, just add to them.

With these tools Google may hope to make Google+ a photo juggernaut like Facebook is now. Giving people access to quick, easy, even automated photo enhancements that don’t require a photo editing program or even a traditional computer is pretty cool. But will it draw people to Google+? Professionals aren’t the only people who want better photo management and enhancement for mobile and even Chrome OS.

These enhancements are rolling out today, so expect to see them show up in the Photo section of Google+ soon. Might be time to turn on auto-uploads and see what happens.