Toshiba may be preparing to launch a new Android tablet with a faster processor. The company’s current tablets have 1 GHz NVIDIA Tegra 2 dual core chips, but Android benchmarking website AnTuTu is showing scores from a new tablet with a 1.4 GHz CPU.

While not specifically labeled as a Toshiba device, the new tablet has a code name similar to those used for other Toshiba tablets. 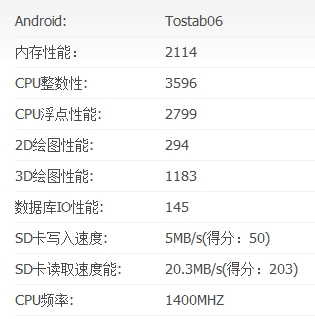 The “Tostab06” tablet has a 1.4 GHz processor. That could mean it will have an NVIDIA Tegra 3 quad-core chip, which has been known to run at that speed. But it could also be an indication that the new tablet will have a new processor from Qualcomm, Texas Instruments, or another hcip maker.

We’ll probably find out more at CES in January.

One reply on “New, faster Toshiba Android tablet in the works?”