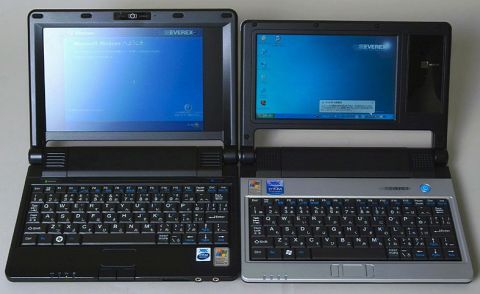 PC Watch got some hands on time with the new Everex Cloudbook CE1220J this week. And it looks like a huge improvement over the original Cloudbook CE1200V. As expected, it has a larger, higher resolution display, a higher capacity hard drive, an ExpressCard slot, and a real (if tiny) trackpad. It’s still hampered by a sluggish VIA C7-M CPU, on the other hand. But since the upcoming VIA Nano chip will be interchangeable with the C7, I suspect Everex might swap out the chip for future versions. Perhaps a CE1220N is on the way?

In related news, jkkmobile reports that the FCC has posted documents about the upcoming Everex Cloudbook CE2A1, including the user manual. As far as I can tell, this is basically the same devices as the CE1220J. It has the same large screen, form factor, and CPU.

One strange thing I noticed in the pictures of the CE2A1 is that the hard drive compartment sticks out on the bottom of the case. It’s as if Everex didn’t even try to make it fit properly in the case and just built a plastic bubble for it to rest in. I’m assuming the sizeable hard drive compartment won’t throw the PC out of balance while you’re typing. But it does look odd.

One reply on “New Everex Cloudbook models on the way”