The new Samsung Chromebook is a notebook with an 11.6 inch display and Chrome OS operating system which weighs less than 2.5 pounds, runs for up to 6.5 hours on a charge, resumes from sleep almost instantly, and costs just $249.

But there’s at least one downside. Unlike the $350 Samsung Series 5 Chromebook and $450 Samsung Chromebook 550, which each have Intel processors, the latest Chromebook has an ARM-based processor. That helps keep power consumption and heat generation down (there aren’t any fans in the new model), but it also breaks compatibility with some services.

You can’t stream videos from Netflix using the new Chromebook… at least not yet. 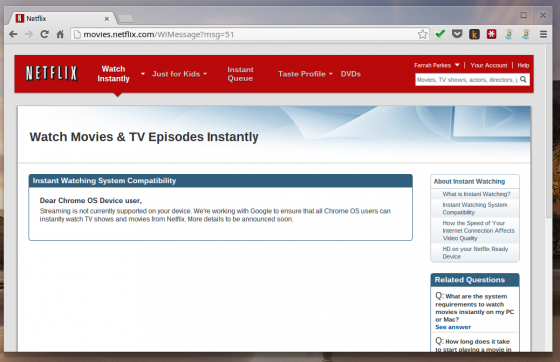 GigaOm’s Kevin Tofel reached out to Google for comment and found out that the company is working to bring Native Client to devices with ARM-based chips, so Netflix support may be on the way.

There aren’t that many big-name websites that rely on Native Client (NaCL) yet, so this probably won’t be a big deal for most users. But if you were hoping to save a few bucks by picking up the new $249 Chromebook and using it to watch Netflix videos… you might be better off either waiting until Netflix is supported or spending a little more money on a model with an Intel x86 processor.

Or you could spend less money on a netbook like a refurbished Acer Aspire One D270 which you can pick up on eBay for around $190. That machine has an Intel Atom N2600 processor, a 10 inch, 1024 x 600 pixel display, and runs Windows 7 Starter. There’s nothing stopping you from installing the Chrome browser and doing much of what you can with a Chromebook — but you won’t get instant on, 100GB of Google Drive storage, or long battery life (unless you pick up an extended battery).