Those of you who stream Netflix on an Android device may soon have a bit more control over video playback. According to a few scattered reports, Netflix is currently testing variable playback speed in their Android app. 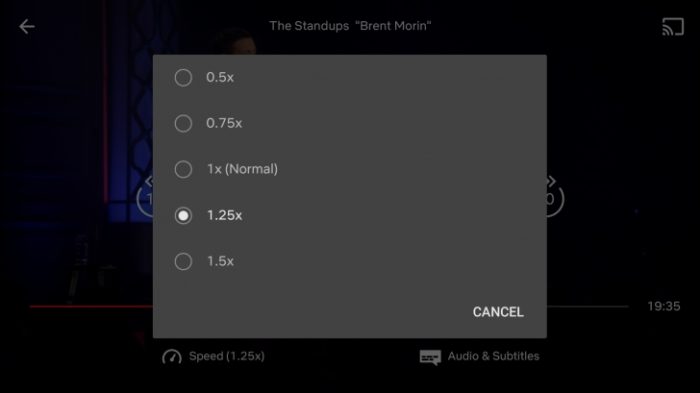 As you can see in the screenshot shared by Android Police, there are two options to slow playback (.5x and .75x) and two to speed it up (1.25x and 1.5x). Trying to finish off an episode before the end of your train ride? Crank it up, like this:

Afraid you’re missing important details? Slow things down to give yourself time to scrutinize the scene.

Most of the reports I spotted on Twitter users were posted by users in India. That could mean that Netflix only plans on rolling the new feature out in areas where they offer mobile-only subscriptions. It could also simply be part of a global rollout that’s just getting under way.

When (and if) it’s available on your device, you’ll find the new speed control next to the audio and subtitles option when you pause a video.

There have already been a lot positive comments posted about the feature. That’s understandable enough. For several years now, tens of thousands of Netflix users have been doing the very same thing with a little help from browser extensions.

The process was simple enough. All you had to do was install one and disable Flash in your browser to force HTML5 playback on Netflix. It’s even simpler today since Flash is mostly out of the picture.

Still, a first-party solution is nice — especially when your favorite desktop browser extensions aren’t available on a mobile OS.

Update: Netflix has confirmed that it’s testing variable speed playback, something that’s generated some positive and negative feedback. So the company has explained that it’s a mobile-only test for now; it’s a feature that’s been available with DVD players for a while, and it’s a much-requested feature.