Netflix has released a new app for Windows 8 that lets you stream video without opening a web browser (and without relying on Microsoft Silverlight). It’s sort of like the Android and iOS apps the company has been offered for a while, but the new Netflix app for Windows 8 is designed to work on tablet, notebook, and desktop computers. 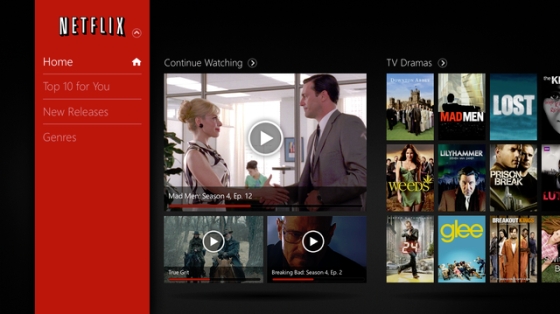 If you’re using a touchscreen you can navigate through the app using your fingers. It also supports multitouch gestures. But subscribers can also use a keyboard and mouse to sift through titles in your queue or find new videos to watch.

Netflix says the free app has also been designed to use fewer CPU resources, so it should run smoothly on a range of devices that may have had trouble with the web version.

While I haven’t had a chance to test the app yet, from what I’ve heard that should include computers with AMD C and E series processors and Radeon HD 6200 and 7300 series graphics.

Unfortunately the new app only works on Windows 8, so if you’ve got a Windows 7 computer with an AMD Brazos processor, you’re out of luck.

It’s also been a few years since Netflix updated its Windows Media Center plugin. I wouldn’t mind seeing a new version of the Netflix app for home theater PCs… but Microsoft doesn’t seem to be putting much focus on media center functionality in Windows 8, so I can’t blame Netflix and other media companies for taking their cues from Microsoft.

If you’re running the latest pre-release version of Windows 8, you should be able to download the new Netflix app from the Windows Store. If you don’t have Windows 8 yet, it’s nice to know the Netflix app will be ready to go when the operating system goes on sale October 26th.

via TechCrunch and The Verge