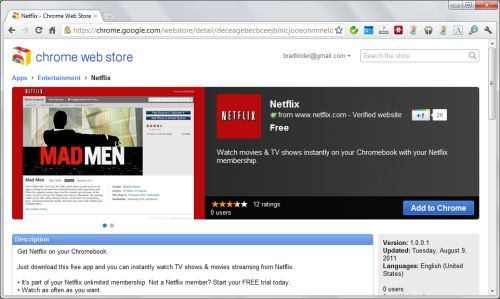 Netflix has rolled out support for Chromebooks, which are laptops running Google’s Chrome OS software. If you’re in the US or Canada, you can now stream TV shows and movies from Netflix using a Samsung Series 5, Acer AC700, or Google Cr-48 notebook.

The company had promised that its Watch Instantly video streaming service would be available for Chromebooks earlier this year, but the first Chrome OS laptops have been available for a few months without Netflix support.

There’s also now a Netflix app in the Chrome Web Store, which means you can also “install” Netflix using the Chrome web browser on a Mac or Windows computer. Essentially that just means you’ve added a bookmark to the Netflix website to your list of Apps though, because there’s really no difference between what you see when using the web app and what you see when you visit the Netflix homepage.

Unfortunately Netflix doesn’t yet stream videos outside of North America and the service doesn’t yet work with Linux — although Linux support is in the works.