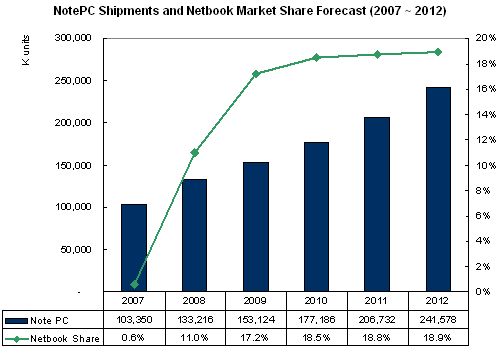 Hello and welcome to today’s installment of  “are netbooks helping or hurting computer makers?” There’s absolutely no doubt that mini-laptops represent the fastest growing segment of the computer industry. This week the researchers at DisplayBank put out a report estimating that 14.6 million netbooks were sold in 2008. That’s about 11% of all notebooks sold over the course of the year. According to DisplayBank, Acer led the pack with 37.3% market share, followed by Asus with 33.2%. HP, MSI, and Intel (who I guess got in on the list because of the Classmate PC), were the stragglers with market share figures in the single digits.

Now, you should take those figures with a grain of salt because DisplayBank might not have access to all of the actual sales figures, and of course some folks will disagree on what exactly defines a netbook. But I think it’s safe to say that millions of netbooks have been sold.

Netbooks have struck a nerve. Ultraportables of the past were priced out of the reach of many consumers, but these new low cost PCs won’t break the bank. And during a recession, the appeal of cheap computers is even greater. But many laptop makers and analysts have worried that the popularity of netbooks will lead people to buy fewer full sized laptops. And that means people could be spending less money on computers overall.

But you know what? There is a recession going on. And it’s quite possible that people who are saving money and spending less on consumer goods in general weren’t going to buy a new computer at all this year. In other words, while laptop makers are facing declining revenue, things could be even worse if companies didn’t have low cost PCs to offer.

4 replies on “Netbook sales are up, are they saving or killing the computer industry?”