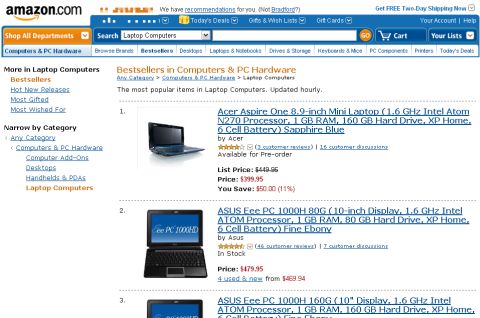 Industry insiders have tried to spin the growth of netbooks as a way to grow the overall market for notebooks – and consequently make more money for companies like Intel, Acer, Asus, and HP. But there may be another side to the story: Netbooks are cheaper than notebooks and they typically have lower profit margins. An Intel Atom CPU costs less than $40 and has a 45% margin, while a Core 2 Duo chip sells for closer to $200 and has a margin of 56%. In other words, Intel has to sell an awful lot of Atom chips to bring in the kind of money it would make on a Core 2 Duo CPU.

And while some people are certainly picking up netbooks as second or third devices, there are probably at least a few folks out there who view netbooks as a viable alternative to a full sized notebook. After all, why spend $800 on a machine with a blazing fast processor that weighs 6 pounds when all you need to do is check your email and surf the web on the go, and you can do that with a 2.5 pound, $400 netbook?

According to Barron’s, ThinkPanmure analyst Vijay Rakesh says netboks are taking a bite out of notebook sales. And that’s not just hurting chip makers like Intel and computer makers like Acer and HP that could theoretically be cannablizing their own sales by offering cheap notebooks. If you look at the top-selling notebooks on Amazon

, you’ll notice that they’re almost all netbooks. And only 2 of the top 10 are from Apple.

That could indicate that netbooks are so hot right now that people are buying them in addition to laptops and in such great numbers that they top the sales charts. But it’s much more likely that they’re displacing at least some sales of traditional laptops.

5 replies on “Netbook popularity could hurt notebook sales after all?”