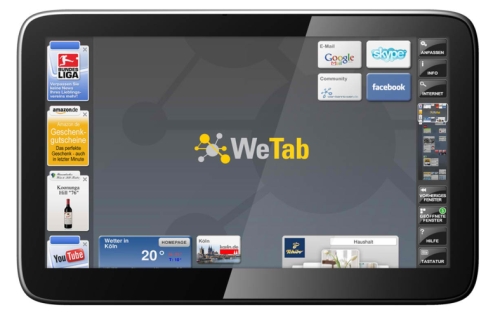 The Neofonie WeTab is a slate style tablet computer with an 11.6 inch capacitive touchscreen display running a customized version of MeeGo Linux. It has an Intel Atom N450 CPU, WiFi, and Bluetooth and checks a lot of boxes on many folks tablet wish lists.

Unfortunately at launch the WeTab will only be available in Germany. Fortunately, the company has confirmed that it will start taking orders for the tablet September 21st — just a week from today. The company will charge 449 Euros for a WiFi-only model with 16GB of storage, while the WeTab 3G with 3G, GPS, HDMI output and 32GB of storage will run 569 Euros.

A rep from Neofonie says the tablet boots in just 16 seconds, and takes just a second to resume from sleep, thanks to the MeeGo technology. You can check out a video from IDF today after the break, thanks to Slashgear.