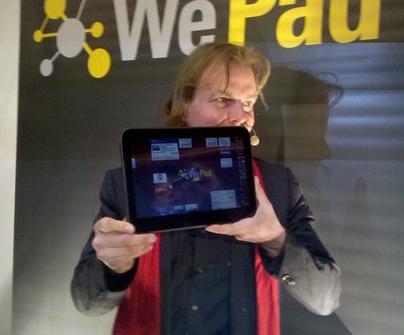 Honestly, at this point I didn’t feel like there was much I didn’t already know about the WePad, the German iPad competitor with a kind of almost clever name. We already knew it would have an 11.6 inch, 1366 x 768 multitouch display and 1.66GHz Intel Atom N450 CPU and run a custom version of Linux with a touch-friendly interface. And we knew it was based on a Taiwanese design.

But Neofonie, the company behind the WePad decided to throw a news conference today, and it turns out there were a few pleasant surprises:

The tablet will be available for pre-order in Germany on April 27th and should be generally available starting this summer.

Here’s a run down of the specs:

Update: Want to know what the WePad’s custom Linux user interface looks like? Picture widgets. Lots and lots of widgets. And multitasking. You can check out a brief demo video after the break.

Update 2: And now we have a hands-on (sort of) video courtesy of Netbook News.de. There was only a single demo unit on display at the news event today, and the presenter didn’t look like he was going to let anybody else hold it. But you can definitely get a look at the hardware and see just how thin the WePad is.

Overall, it’s pretty small for a device with an 11.6 inch display. The screen is rather glossy, but that probably looks worse in the video than it would in real life thanks to the lighting in the room and the awkward camera angles.  You can check out the Netbook News video after the break as well.