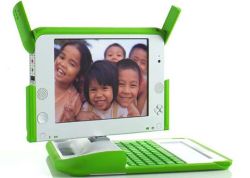 The netbook revolution has its roots in the One Laptop Per Child project. OLPC founder Nicholas Negroponte envisioned getting cheap, educational, and open source laptops into the hands of millions of children around the world. Things haven’t really worked out that way. Four years after the project begun, only 900,000 OLPC XO Laptops have been distributed to children. That’s not nothing, but it’s a drop in the bucket when compared with the tens of millions of low cost netbooks selling in developed and developing nations alike.

And that’s probably not a bad thing. The point is that the OLPC project did force PC makers to think about ways to make computers more mobile (smaller and with better battery life) and cheaper. While fewer than a million XO Laptops have been distributed, hundreds of thousands of low cost notebooks from competitors, including the Intel Classmate PC have also been sold to schools, governments, and other organizations in the market for computers for educational purposes.

In a recent interview, Negroponte told ZDNet that one of the biggest mistakes OLPC made was to design a custom Linux-based operating system called Sugar OS for the XO Laptop. The OS was designed to be easy for kids to learn and to offer educational and social tools. But it also handled power management, WiFi features, and other aspects. He says it would have been better to ship the XO with a more traditional Linux desktop environment and offer Sugar as an application that can be run on top of it.

Wayan Vota at OLPC News has another idea. He thinks the biggest mistake was calling the XO Laptop the “$100 laptop.” The name caught on like wildfire, but the OLPC Foundation was never able to bring the cost down to that level. An XO Laptop today goes for closer to $200. That’s still pretty darn cheap for any laptop by 2006 standards. But it’s not a $100 laptop, and people have spent a lot of time and energy over the last few years making fun of the so-called $100 laptop.

What do you think? Is there one big mistake that explains why millions of kids aren’t using XO Laptops in classrooms around the world right now? Or is it a series of little mistakes? Or did Negroponte & co do everything right… only to have their dream usurped by the free market?