The lightest model weighs just 769 grams (about 1.7 pounds), despite featuring a 13.3 inch display. 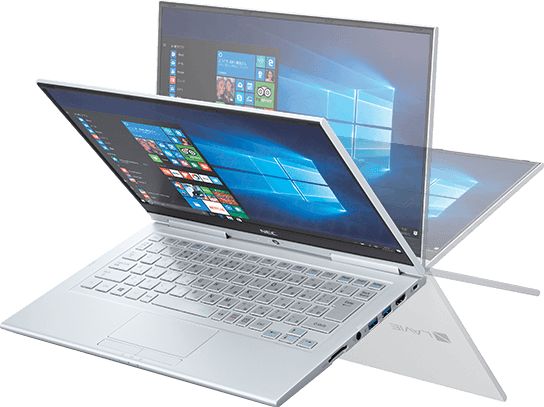 Much like Dell’s XPS 13 laptops, the LaVie Hybrid Zero HZ350 is smaller than most notebooks with similar-sized screens, thanks to slim bezels around the display and a webcam that’s placed below the screen rather than above it.

But there’s another reason for its light weight: NEC says the laptop has a battery that should only provide up to 6.5 hours of run time on a charge. If you want more battery life, there are also slightly heavier HZ550 and HZ750 models that offer up to 10 hours of battery life. Each model is also compatible with an optional fast charging adapter.

The 13.3 inch Hybrid Zero laptops feature convertible designs with 360-degree hinges that allow you to push the screen all the way back and hold the laptop like a tablet. But the company also has a new line of 11.6 inch LaVie Hybrid Zero 2-in-1 laptops with Kaby Lake chips and detachable keyboards.

The NEC LaVie Hybrid Zero HZ300 series computers are also pretty compact, with a starting weight of 786 grams (1.73 pounds) when using both the keyboard and tablet together. The tablet alone weighs 398 grams (14 ounces).

While NEC laptops are rarely sold in the United States, a few years ago NEC did partner with Lenovo to sell some models internationally under the Lenovo LaVie Z name. There’s no word on if or when these new models will be available outside of Japan.