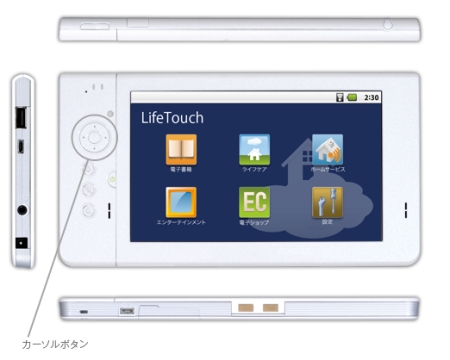 NEC plans to launch a 7 inch tablet with a rather interesting design. The machine will have a 7 inch, 800 x 480 pixel display and run Google Android 2.1. Nothing all that new there. But what sets it apart from other tablets from Archos, Camangi, and dozens of other companies are a decent array of optional accessories and a D-pad built into the casing.

The NEC LifeTouch will have an ARM Cortex A8-based CPU, 256MB of RAM, 802.11b/g WiFi, Bluetooth 2.1, GPS, an accelerometer, and a 3MP camera as well as 2 USB ports and an SDHC card slot. NEC is promising up to 8 hours of battery life.

There’s no mention of a 3G modem, so I’m not holding out too much hope that the tablet will include access to the Google Android Market at launch. But the fact that it does feature plenty of buttons for home, search, and settings functionality should help. And that directional pad looks like it could be useful for navigating through web pages and other applications. It also makes the nEC LifeTouch look like it could be a pretty nifty gaming machine.

The press photos show also show a decent looking docking station as ell as a case with a lid to protect the screen, which the folks at Android Guys rightly point out makes the tablet look a bit like a Nintendo DS.

The tablet is expected to go on sale in Japan in October.