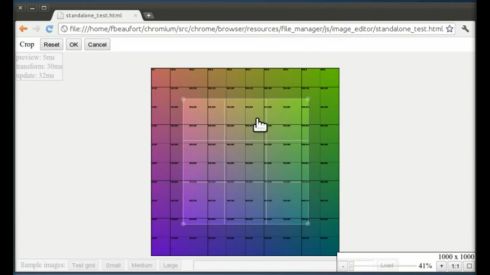 Google is hard at work turning Chrome OS into a fully-functional operating system. Right now Chrome’s claim to fame is that it’s little more than a web browser. Instead of installing and running desktop apps, you run web apps, and when you boot a Chromebook the only thing you see is a login screen and then a web browser.

But while there are web apps that let you do almost anything these days, and while Google’s approach has led to laptops with super-fast boot speeds, there are a few problems. Many web apps, for instance, don’t work if you don’t have an internet connection, so a Chrome OS laptop starts to look like a paperweight when you’re on an airplane or in a subway.

And some tasks are just simpler to do with native apps than web apps. Why, for instance, should I have to upload a picture or movie to the web to edit it? Well… soon you may not have to — at least when it comes to pictures.

Google is building a native image editor into Chrome OS. You can use it to resize, rotate, crop, or add effects to images without uploading your image to the web first. Developer François Beaufort describes the process for downloading the code for the utility from the Chromium project. That’s the open source, development version of the Chrome operating system.

The user interface reminds me a bit of what you see when you use the Picnik web-based image editing service. That’s not surprising, since Google acquired Picnik last year.

Since Google first unveiled Chrome OS, the company has added a file browser, music and video players, and soon there will be a built-in image editor. If this keeps up, soon the browser-based operating system may just look like… an operating system.