A few years ago Progress Technologies introduced a First of the North Star eReader featuring dual E Ink displays and every issue of the popular Manga pre-loaded.

Now they’re back with a Naruto version.

It’s up for pre-order from Kickstarter for about $460 and up, and the price includes all 72 volumes of Naruto, which come pre-loaded on the device. Early bird shipments are expected to go out starting in December.

And unlike the First of the North Star version, the Naruto eOneBook features an SD card reader — which means you can swap out titles. 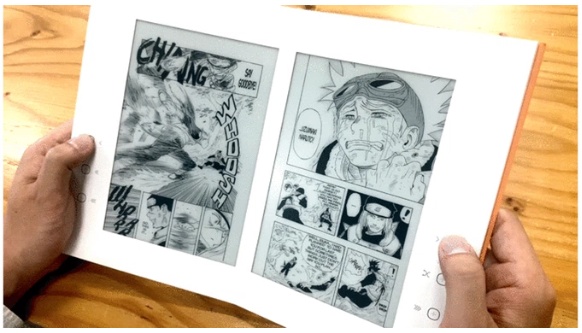 The original idea behind the eOneBook was that it would look and act a lot like a print book. There are two E Ink displays, a hinge that allows the whole thing to fold up like a book, and even a paper jacket that makes it look like a book if you put it on your shelf.

And like a paper book, the eOneBook First of North Star eReader comes with all the content it will ever support. There’s no way to swap titles on that particular model.

The Naruto version, on the other hand, comes with all 72 volumes of Naturo on an SD card. The company does note that the manga is in an “eOneBook format,” so it’s unclear if you’ll be able to read titles that aren’t purchased from Progress Technologies (officially you cannot, but I wouldn’t be surprised if someone finds a way).

But the good news is that this isn’t technically a single-purpose/single-title device like its predecessor. At least theoretically. Right now there are no other titles officially available for this eReader.

The new eOneBook still has a book-like appearance, complete with a paper exterior and dust jacket and a folding design. You open and close the eReader to turn it on and off.

There are a few things that obviously set this apart from a real book. The first is that it features dual 7.8 inch E Ink displays rather than ink on paper. The second is that there are six physical buttons for navigation (including page turn, chapter and volume switch, and special function keys). And… the eOneBook runs on four AAA batteries. If your batteries die you need to swap them out to keep reading.

By comparison, you could save some money by picking up the complete 72-volume set of Naturo in print form. Amazon is currently selling it in 3 box sets for about $330. But good luck stuffing all of those titles into your suitcase when packing for your next vacation. On the other hand, you don’t need batteries to read those books.

The Naruto eOneBook weighs about 1.1 pounds, measures about the size as an A5 format manga book, and Progess Technologies says the batteries should last for about 5,000 page turns.

Compared to other eReaders, it’s worth noting that this model does not support WiFi, does not have a touchscreen or frontlight, and while the company says the Naruto eOneBook has high-resolution displays and high-quality images, the Kickstarter campaign doesn’t include specifics about the resolution.

The manga on the Naruto eOneBook is also only available in English — there’s no language switching feature. And while the original manga includes some color images, they’ll be rendered in black and white on the eOneBook, which only has grayscale displays.