The Nanote P8 is a miniature laptop computer with a 7 inch, 1920 x 1200 pixel IPS LCD touchscreen display, QWERTY keyboard, and a 360-degree hinge that lets you fold the screen back and use the little computer as a tablet.

It will be available for purchased in Japan soon for less than $300, making it one of the more affordable mini-laptops launched in recent years. But it’s not exactly going to be a speed demon. Some of the Nanote P8’s specs look a little dated in 2021. 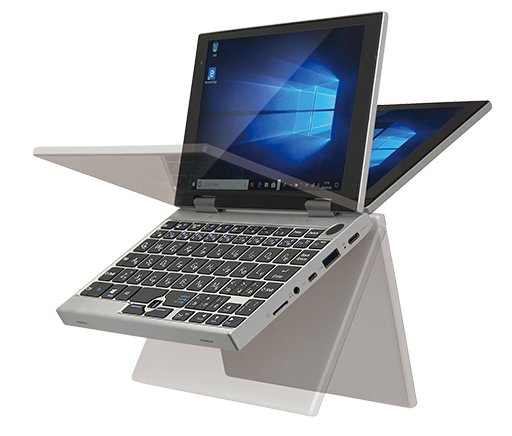 For example, it’s powered by an Intel Pentium N4200 processor, a low-power quad-core chip that was released in 2016. The computer’s wireless capabilities top out at 802.11b/g/n WiFi and Bluetooth 4.0. And it has just 64GB of eMMC storage.

But the Nanote P8 is an upgrade over the first-generation Nanote which was released last year. That model had an even older, slower Atom x5-Z8300 processor and just 4GB of RAM (the new model has 8GB.

The folks at PC Watch have a hands-on review of the new model, and report that it performs much better in most benchmarks than its predecessor.

The Nanote P8 measures about 7.1″ 4.5″ x 0.8″ and weighs about 1.2 pounds, making it small enough that you may be able to slide it into a pocket. And unlike some other mini-laptops, it does have a webcam… just not a very good one. It’s only capable of snapping 0.3MP shots, which means you’re probably better off using your phone for Zoom calls, but I suppose it’s nice to at least have the option of using the Nanote P8’s camera.

Other features include USB-C, USB 3.0 Type-A, and micro HDMI ports, a 3.5mm audio jack, stereo speakers, a microphone, and a microSD card reader.

While it’s unlikely that this particular mini-laptop will be sold outside of Japan, it is nice to see that at least one company is continuing to focus on the low-end space at a time when most of the players in the mini-laptop space seem to be focusing on bigger, pricier options.

Update: CNX Software suggests that the Nanote P8 is based on a OEM design from Pretech, which now shows several CPU options ranging from Atom x5-Z8350 to Pentium N5000.