Last year an inexpensive tablet aimed at kids called the Nabi hit the market. It wasn’t exactly a top-of-the-line system, featuring a 533 MHz ARM Cortex-A9 dual core CPU and a 7 inch, 800 x 480 pixel display. But it was cheap, at about $200.

These days, $200 tablets are a dime a dozen, thanks to the Nexus 7, NOOK Tablet, Kindle Fire, and their peers. But instead of dropping the price for the Nabi 2, the makers of the new tablet replaced the insides with some surprisingly decent specs. 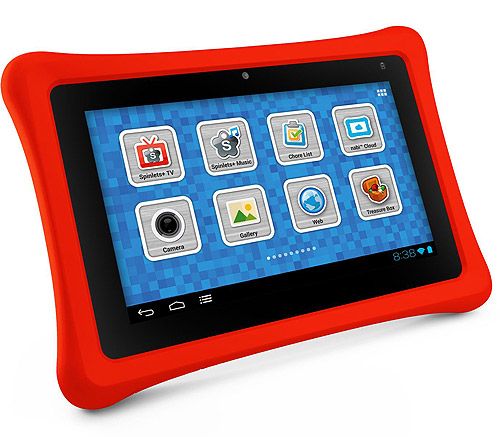 The tablet has 1GB of RAM, 8GB of storage, a front-facing 2MP camera, a microSD card slot, microUSB port, and mini HDMI port.

It runs Google Android 4.0 and has a 4,000mAh battery, which Android Police reports is good for about 6 hours of run time.

This tablet is still aimed at kids, and has a thick, rugged case that should help protect it from the wear and tear kids can inflict on electronics. There’s also kid-friendly software, as well as a parent-friendly “parent mode” which lets you turn off the custom interface for kids and use the device like a full Android tablet.

Unfortunately, out of the box, the Nabi 2 doesn’t include the Google Play Store or Google apps such as Gmail, Google Talk, or Google Maps.