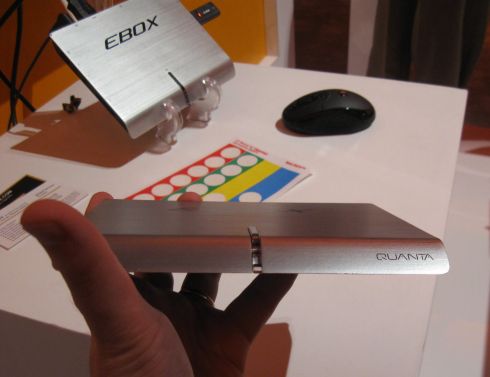 As I was wandering past Marvell’s exhibit at CES this weekend, I spotted an incredibly tiny PC called the EBOX connected to a big screen LCD. The display showed that the computer was running Ubuntu 9.10 Karmic Koala and that it could handle 1080p HD video playback.

When I asked if there was a spec sheet, I was told it’s on the web, but I can’t seem to find any information about this prototype online. So here’s all I know about the EBOX at this point: It’s tiny, impossibly light (I’d say under a pound), and the OS is running off of an SD card. There’s no hard drive.

The PC uses a Marvell Armada 510 processor, which is the same chipset that’s powering the smartbook I mentioned earlier this week. The Armada 500 series processors are ARM v7-based chips that can run up to 1.2GHz.

I don’t think the EBOX is actually a finished product that’s ready to come to market yet. Rather, it’s a prototype developed by Quanta. But it’s one of the tiniest computers I’ve ever seen. I seriously thought at first that it was a media player, not a full-fledged computer.