Pegatron is a Taiwanese device manufacturer that builds products for other companies, much the way Foxconn or Wistron does. So when benchmark results for an unannounced Android device called the Pegatron E-Tab 4G show up online, you can be pretty sure that’s not the name this tablet will be sold under.

But it certainly looks like Pegatron is working on a tablet for some client or other. 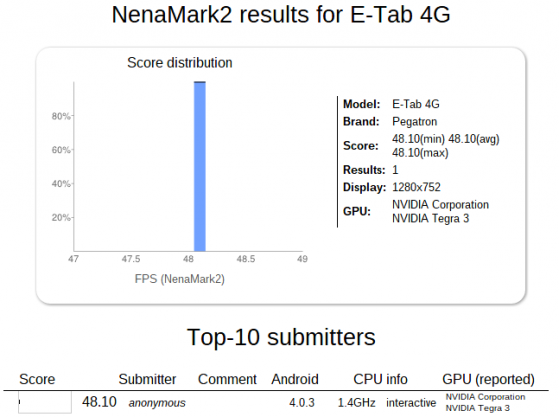 The E-Tab 4G showed up recently in online benchmark results from NenaMark and GLBenchmark.

The tablet appears to have a 1.4 GHz NVIDIA Tegra 3 quad-core processor, a 1280 x 752 pixel display (which is probably a 1280 x 800 pixel display in real life), and Android 4.0 operating system. Judging by the name, I’m also assuming the tablet can handle 4G mobile broadband.

As you’d probably expect from a device with a Tegra 3 chip, the E-Tab 4G scores pretty well in the benchmark tests. But for now that’s about all we know about the tablet.

There’s no information about the screen size, memory, storage, or other specifications. It’s not even clear whether this device will ever actually make it to market. But it’s not unheard of for a tablet to show up first at an online benchmarking site months before it’s officially launched. That’s what happened with the Acer Iconia Tab A700 and Lenovo IdeaTab/LePad K2.