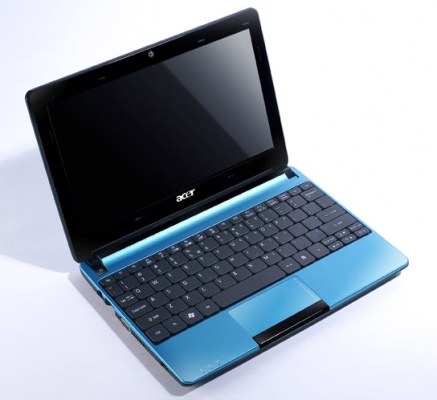 Acer is showing of a shiny new 10 inch netbook this week… but the company isn’t providing many details to let us know how it differs from all the other 10 inch netbooks Acer has released over the last few years.

The Acer Aspire One D257 definitely appears to have one of the thinnest netbook cases around, measuring less than an inch thick. And the hinge has been redesigned to incorporate the power button. The laptop will dual boot Google Android and Windows 7 Starter Edition — but that’s something the last few Aspire One netbooks have been able to do as well (at least in some regions… Acer doesn’t tend to offer Android on its netbooks in the US).

but Acer says the Aspire One D257 will run for up to 8 hours on a charge, support Bluetooth and WiFi, and come in aquamarine, dark chocolate, or seashell white colors. It also looks like you can open the laptop up wide so that the screen tilts back further than 180 degrees from the keyboard — something you don’t see on a lot of laptops or netbooks.

The D257 has 3 USB ports, VGA and Ethernet ports, and mic and headphone jacks. It weighs about 2.2 pounds.

Update: Notebook Italia says the laptop will be available with an Intel Atom N455 or N475 single core procesosr or an N550 or N570 dual core chip.

You can check out a hands-on video from Notebook Italia after the break.

One reply on “Acer Aspire One D257 hits the scene”