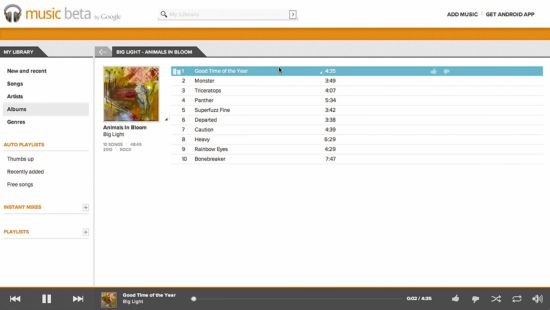 Google has launched a new music service called Music Beta by Google. It allows users to upload their music collection to the web and stream songs over the internet to a computer or Android phone or tablet.

As expected, it looks like Google is launching the service without any support from record labels, so while you’ll be able to upload your music collection to the cloud, you won’t be able to purchase tracks using Google’s music service.

The good news is that the Android app will cache recently played songs so you can play music even when you’re offline. The app will also support playlist synchronization, so if you create a playlist on your computer it will show up on your phone.

Google is launching a new version of the music app for Android 2.2 today to support the new service. Music Beta allows users to upload 20,000 songs to the cloud — which means you get about 50GB of disk space. Unfortunately Google only promises that the service is free “while in beta,” which means that the company may eventually start charging for its music service.