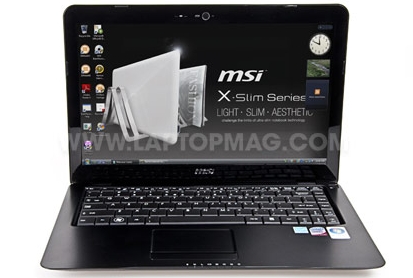 MSI is expected to launch the X340 slim and light laptop in the US soon. It’s not exactly a netbook, since it has a 13.4 inch display. But it is a thin and light computer that takes some of its design cues from netbooks. It weighs just 2.9 pounds and measures between 0.24 and 0.78 inches thick from its thinnest to thickest points. In other words, it’s almost the same size and weight as Apple’s Macbook Air. But with a starting price of $899, the MSI X340 costs about half the price of the Macbook Air.

Laptop Magazine has posted a detailed review of the MSI X340 based on a pre-production unit. In a nutshell, the way MSI managed to undercut the Macbook Air on price is by using cheaper parts. The notebook is attractive as all get out, but it’s made of shiny plastic instead of aluminum. It has an Intel Consumer Ultra Low Voltage (CULV) Core 2 Solo processor instead of the Core 2 Duo the Macbook Air uses. And in case it wasn’t obvious, the MSI X340 ships with Windows Vista, not OS X.

Performance-wise, the computer is a mixed bag. On the one hand, it’s more powerful than most netbooks and has a higher resolution display. It can handle CPU intensive tasks like transcoding video better than any Intel Atom powered netbook on the market. And it plays 720p video smoothly. It also comes with a 4 cell battery which lasted for about 3 and a half hours in Laptop Magazine’s test, which isn’t bad by netbook standards, but it’s also not spectacular. MSI will eventually make a higher capacity 6 cell battery available which should provide at least 5 hours of run time.

You can find all the details, plus more photos at Laptop Magazine.

2 replies on “MSI X340 reviewed: Stuck between a netbook and an Air space”