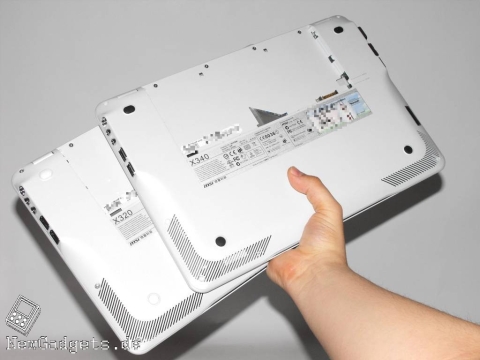 MSI’s new X-Slim series netbooks notebooks look like a cross between a typical netbook and a Macbook Air. They’re larger than most netbooks, with 13.4 inch displays. And they feature some sleek styling and super thin cases that make the comparisons to the Macbook Air inevitable. But unlike the Macbook Air, MSI is selling these laptops for around a thousand dollars or less.

While neither the MSI X320 or X340 are shipping in the US yet, you can find them in Germany. And Johannes at NewGadgets.de has had a chance to play with both. He’s posted a series of unboxing photos of the X320, as well as a quick shot (shown above) comparing the X320 and X340. While both sport 13.4″ 1366 x 768 pixel displays, the X340 is a bit more of a powerhouse, with an Intel Core 2 Solo CPU and HDMI output.

The MSI X320, on the other hand, sports a low power 1.6GHz Intel Atom Z530 CPU and a VGA output (because HDMI would be overkill given the graphics capabilities of the Atom CPU with integrated graphics). But besides being larger than a typical netbook, the X320 also packs a little more punch. It ships with 2GB of RAM and a 320GB hard drive. This means it doesn’t qualify for Microsoft’s ULPC Windows XP licenses, and it comes with Windows Vista HOme Premium preloaded.