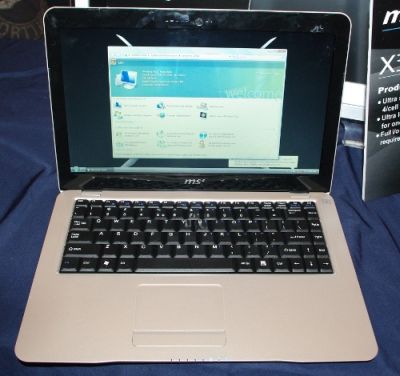 MSI launched the MSI X320 last night. It looks an awful lot like a MacBook Air. It has a 13.4  inch, 1366 x 768 display and it’s super thin and light, measuring less than an inch thick, and weighing about 2.9 pounds. But unlike the MacBook Air, the MSI X320 runs on an Intel Atom Z520 CPU which means two things: It won’t exactly be a speed demon, and it’ll be a lot cheaper than the Air.

How much cheaper? Laptop Magazine reports that the X320 will retail for between $700 and $900.

Now, normally I would say that this machine falls outside of Liliputing’s scope. I’ve always been interested in small, cheap laptops. And with a starting price of $700, the X320 isn’t exactly an impulse buy.

But I came to an interesting conclusion when talking to an AMD rep about several new HP machines built around the new AMD Yukon platform. (More on that later). What really made netbooks special is that in 2007 Asus built the first consumer oriented ultraportable laptop that didn’t cost more than a full sized laptop just because it was smaller. It used to be that if you wanted an ultraportable machine you would have to pay top dollar for it. And now thanks to Asus, Acer, HP, Dell, Lenovo, MSI, and a whole bunch of other companies (including the OLPC Foundation), that’s not the case anymore. You can buy a 7 to 10 inch laptop that provides decent if not spectacular performance for around $400, sometimes less.

Now here’s the thing. That still leaves a fairly large gap in the market for light weight computers. You can pay around $400 for a netbook. Or anywhere from $400 to $1200 or so for a full sized laptop that probably weighs 5 or 6 pounds or more. Or you can pay $1500 for a 3 pound notebook with a larger, higher resolution display and better graphics and processing power, not to mention an optical disc drive.

The MSI X320 helps fill a new niche: Sub-$1000 light weight, full sized computers. Sure, $700 is still a hefty chunk of money for some people. But if you care more about light weight than small size, I can see some folks paying extra for a larger display and a full sized keyboard.