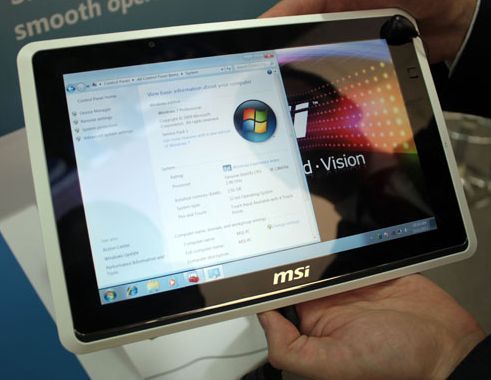 MSI is showing off a new 10 inch tablet running Windows 7. No, it’s not the MSI WindPad 110W with an AMD Fusion processor. It’s the new WindPad 120W with a 1.86 GHz Intel Atom Cedar Trail chip.

The tablet has a capacitive touchscreen display, support for GPS and 3G connectivity, and features Intel’s WiDi 2.0 wireless display technology. It also has a feature that MSI calls FFS or Fast Flash Standby, but I suspect this is the same thing as Intel’s new “Rapid Start” technology which saves your hibernation file to a flash storage so you can resume more quickly than you would if you were just using a hard drive.

MSI has added an optical trackpad to the right side of the tablet, which should make it easier to use Windows applications which don’t respond well to touch input. The tablet has 2GB of DDR3 memory and a 32GB solid state disk.

The MSI WindPad 120W also features SRS surround sound and HDMI output. I’d take the specs with a grain of salt though, since the product card on display at Computex describes the tablet as “ultra potable.” I’m not sure it really is safe to drink…