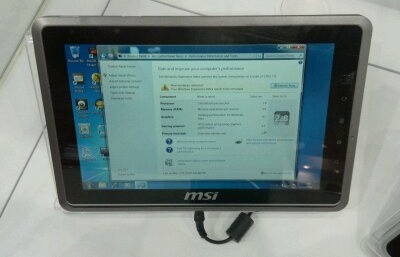 As expected, AMD is starting to show off a new version of its 10 inch Windows tablet called the WindPad 110W. What sets this model apart from the WindPad 100W that’s already shipping is that the new tablet has a low power AMD C-50 processor and AMD Radeon HD 6250 graphics while the WindPad 100W sports an Intel Atom chip.

The folks at Netbook News, UMPC Portal, and Engadget all got a brief look at the new tablet today — but since it’s currently tucked away behind glass at the MSI CeBIT exhibit, we haven’t seen any real performance tests yet.

The MSI WindPad 110W has 1 USB port, an HDMI port, rear-facing camera, and a SIM card slot. It has a 10.1 inch, 1024 x 600 pixel display, runs Windows 7 Home Premium, capacitive touch buttons on the side, and an optical touchpad.

MSI claims the tablet will run for up to 8 hours on a charge, which sounds a little optimistic, but not out of the realm of possibility.