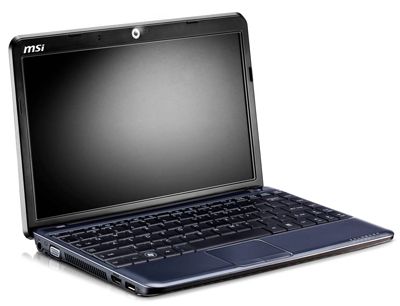 The MSI Wind U230 is a 12.1 inch laptop with a dual core AMD Neo processor. It made a brief cameo appearance on the MSI web site last month before disappearing for a bit. But now the Wind U230 is back, and there’s even  a press release to make things all official-like and stuff.

In a nutshell, the Wind U230 is a lot like the company’s other Wind U2xx-series notebooks in size and shape. But while those machines feature Intel chipsets, the MSI Wind U230 has a 1.6GHz AMD Congo Neo X2 processor and ATI Radeon HD3200 graphics. It supports DirectX 10 and HD video playback.

MSI also touts the computer’s “ultra-long battery life,” but by ultra-long, the company means 4 hours. And according to the folks at Hexus, who reviewed a pre-release model, you should expect closer to 3 hours.

Here’s a rundown of the rest of the specs:

Hexus found that the computer scored below a system with Intel’s dual core SU7300 CULV processor in CPU benchmarks. And Wind U230 trounced notebooks with Intel GMA X4500MHD and GMA 950 graphics when it came to playing video games with 3D graphics. But it got pretty lousy battery life. It’s possible that MSI could address that issue before releasing the notebook early next year, since Hexus reviewed an early engineering sample.