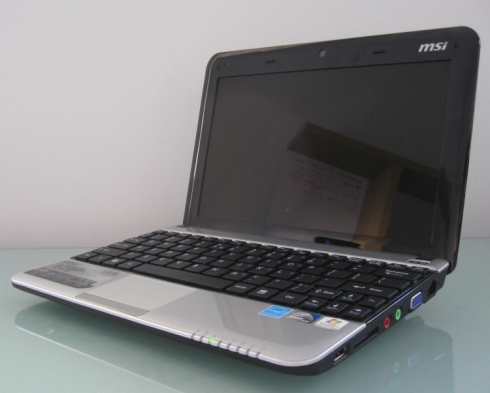 The MSI Wind U135 is a 10 inch netbook with an Intel Atom N450 Pine Trail processor and a chiclet-style keyboard. That sentence could describe virtually every netbook released in the first half of 2010, but the Wind U135 stands out from the crowd just a tiny bit due to decent build quality and an excellent keyboard.

But the computer isn’t without its issues. There are no access panels for upgrading the RAM or hard drive, and the touchpad lacks support for multitouch gestures.

At first glance, the MSI Wind U135 looks a lot like the company’s first netbook – the Wind U100 which was released in 2008. It has rounded edges, a ridiculous number of status LEDs on the lower right side (8 in all), and a 6 cell battery which juts out a little from the bottom of hte laptop. 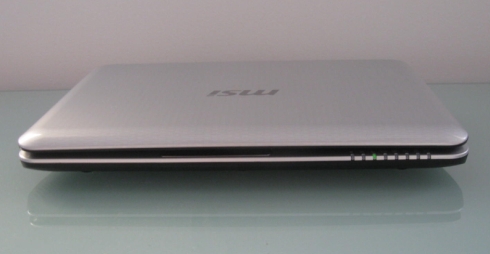 But MSI has tweaked its design a bit over the years. The computer now comes in four color options: blue, red, black and silver. The touchpad button has a chrome finish, and at leas ton the silver model I’m testing, there’s a subtle pattern of gray lines across the lid. The Wind U135 is also the first MSI netbook to feature a chiclet-style keyboard, but more on that in a moment. 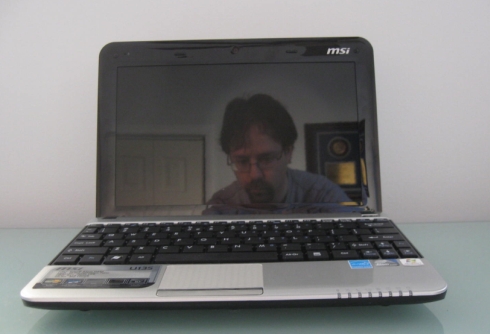 While the MSI Wind U100 had a matte display, the Wind U135 has a glossy screen, which makes it a bit harder to use outdoors, where sunlight effectively turns the screen into a mirror.

Along the sides of the netbook you’ll find 3 USB ports and colorful VGA, mic, and headphone jacks as well as a flash card reader and Ethernet jack.

The left side of the laptop has a large vent which has become a bit of a signature element on MSI netbooks. There’s also plenty of ventilation on the bottom of the computer, which helps it run fairly quiet — although you can occasionally hear the fan spinning. 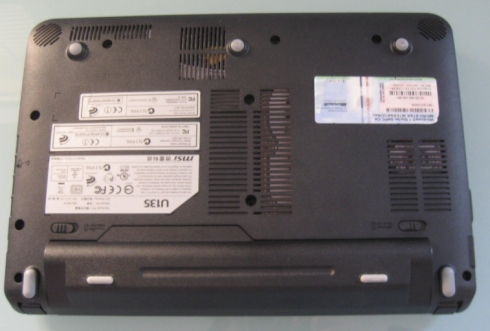 There are no access panels on the base of the netbook, which means you’ll need to remove 9 screws to get at the memory and hard drive.

The battery sits flush with the back of the laptop, but if you get a model with a 6 cell, 58Whr battery, it will stick out a bit from the bottom, raising the rear of the laptop. 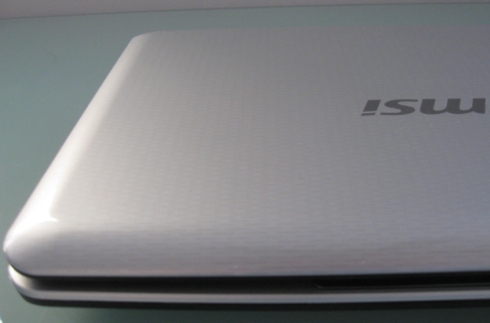 The MSI Wind U135 has a glossy finish on the lid and palm rest area as well as the area above the keyboard.  And while fingerprints aren’t too noticeable from a distance, if you look more closely, you can definitely see smudges from oily fingers.

I really like the chiclet-style keyboard on the MSI Wind U135. It looks much the same as the keyboard on the Asus Eee PC 1005PE, but some of the Fn keys are in different spots. You can hit the Fn key plus a number of other buttons to adjust the volume, screen brightness, toggle the wireless connections, or turn off the touchpad. 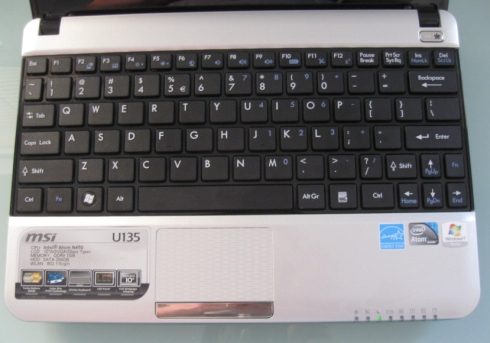 Hitting FN+ F10, for example will trigger the MSI ECo software, which adjusts your computer’s settings to improve performance or battery life for different situations (such as gaming, or presentation mode).

But back to the keyboard. There is a little flex in the middle of the keyboard if you push down too hard. But honestly, that’s the sort of thing I only notice when I take the time to press on the keyboard and look at it. When I’m typing, it’s not a problem.

The keys are flat, with a little space between them making them easy to detect without looking down. I took a typing test and notched a score of about 100 words per minute, which is about average for me. 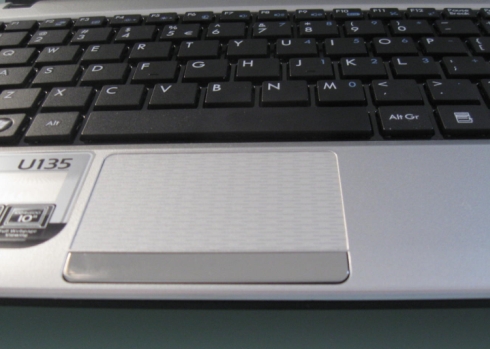 The touchpad is reasonably wide for a 10 inch netbook. There’s only a single wide button below the touchpad, instead of distinct left and right buttons.

I’m kind of running out of things to say about the performance of netbooks with Intel Atom N450 processors and integrated Intel GMA 3150 graphics. They’re all pretty much the same in this department. And that means you can probably play most 720p HD video, but don’t expect 1080p video to run smoothly. High quality Adobe Flash video can also cause some problems. 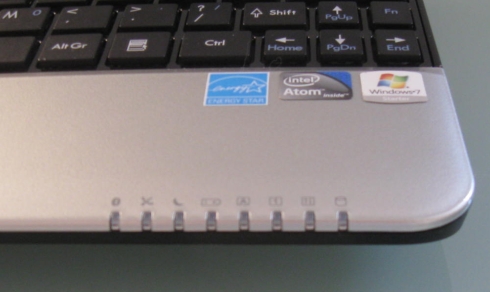 I had no problem performing day to day activities including surfing the web with multiple browser tabs open, editing photos using a light-weight image editor, and listening to music.

The computer’s built in speakers are some of the tinniest and quietest I’ve heard. My smartphone speaker almost sounds better. So if you do plan to spend a lot of time listening to music on this netbook, you might want to invest in a good pair of headphones.

The Intel Atom N450 processor isn’t noticeably faster than the Atom N270 or N280 processor. So odds are if you’ve handled a netbook in the past 2 years, you know how well the MSI Wind U135 performs. It’s good enough for light weight tasks, but I wouldn’t want to edit video on it. 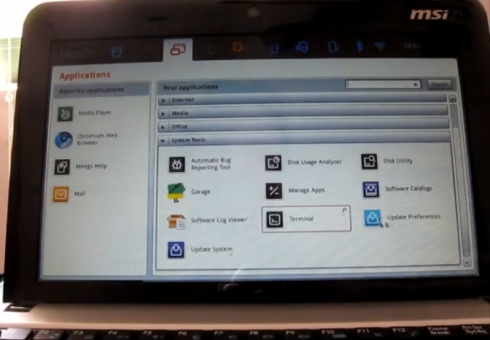 I should also point out that while I primarily tested the netbook with Windows 7 Starter Edition, I also took MeeGo Linux for a spin on this netbook, and even while running from a USB flash drive, this custom Linux operating system was surprisingly fast. It booted in under 30 seconds, and the program launcher was super speedy. Apps didn’t actually seem to launch any faster in MeeGo than they do in Windows, and I didn’t notice any major difference in the web surfing experience. But man, was the user interface zippy.

The demo unit I received has a 6 cell, 5200mAh, 58Whr battery. I managed to get about 5 hours and 40 minutes of run time while surfing the web over WiFi with the display brightness set at about 50%.

I’m generally pretty happy with any notebook that gives me more than 5 hours of battery life, since I rarely need to use a computer a coffee shop or on a train for longer than that. But to be honest, I’ve come to expect better from netbooks with similar specs.

For instance, the Asus Eee PC 1005PE gets about 10 hours of battery life, while Eee PC 1001P gets about 8 hours and 23 minutes. The Dell Inspiron Mini 10 lasts for about 9 hours. And while the Samsung N210 wasn’t quite as stellar as those netbooks in the battery life department, but it managed to squeeze 6 hours and 6 minutes out of a 48Whr battery.

If battery life is one of the most important features for you, then you might want to consider a different netbook. But the MSI Wind U135 does outperform most full sized power-hungry notebooks on the market.

The MSI Wind U135 usually costs about $330 and it’s a good value at that price. But at $305 the netbook is even more attractive. It combines a good keyboard with Intel’s Atom N450 processor which offers more than enough power for casual computer users who don’t need to watch HD video or edit enormous images in Photoshop. 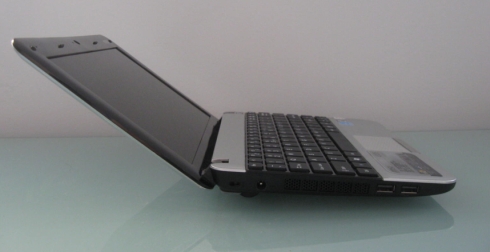 But I’m not really that big a fan of the touchpad which lacks support for multitouch gestures. And while 5:42 of run time isn’t bad, I’m surprised that the laptop doesn’t get better battery life out of a 58Whr battery.

The Wind U135 is definitely a step up from the MSI Wind U100 netbook. But it’s a baby step.