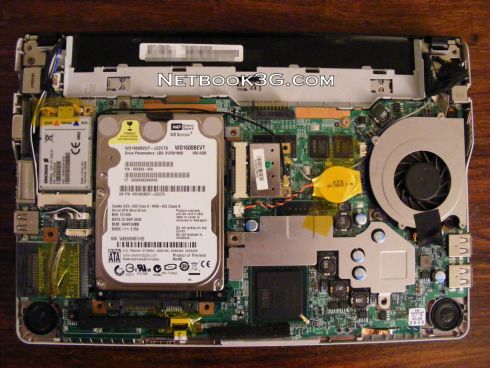 I’ve seen several different sets of photos of the MSI Wind U120 netbook with its top off. But somehow I didn’t notice the lack of a memory slot until jkOnTheRun’s Kevin Tofel pointed it out the other day. Apparently MSI decided to do away with the memory slot in order to make room for the integrated 3G card and the optional SSD. That means that you get 1GB of non-removable memory with the MSI Wind U120 and no way to upgrade it, even though the computer could theoretically support up to 2GB of RAM just like its predecessor.

This probably isn’t a big deal for some users. I’ve never bothered upgrading the RAM on my Eee PC 1000H, and it runs Windows XP, Windows 7, and a wide variety of Linux distributions just fine with 1GB of RAM. If you’re a hard core multitasker or gamer, you might want more memory. But you’ll also probably want a faster computer.