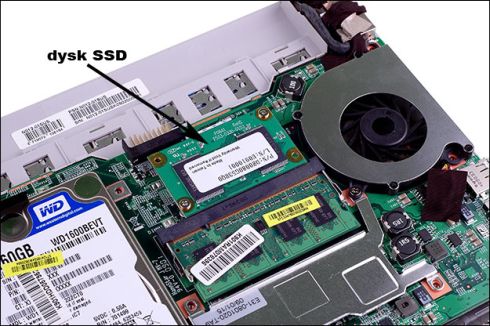 The MSI Wind U115 isn’t making the rounds in the US yet, but it looks like some European tech sites are getting their hands on pre-release versions of the netbook. Yesterday we got a battery life report from Germany. And it looks like Polish tech site nvision got some hands on time with a U115 earlier this month.

The MSI Wind U115 has a few things that set it apart from other netbooks. First, it uses the Intel Atom Z530 CPU, which is more energy efficient than the Intel Atom N270 chip found in most netbooks. Second, it has a unique storage system involving an 8GB SSD and a 160GB hard drive. The operating system sits on the SSD, along with any programs or files you can fit on the solid state disk. This allows the computer to turn off the hard drive when it’s not in use, which conserves energy and prolongs battery life.

According to nvision, the U115 gets between 5.5 and 15 hours of run time from a single battery charge depending on use conditions. There’s no mention of the battery capacity, but that figure isn’t too far off from the 13 hours that Eee PC.de reported with a 6 cell, 5200mAh battery.

The SSD appears to be reasonably fast, but if it’s not good enough for you, it looks like the SSD should be user upgradeable. I mean that in the strictest, warranty-voiding sense of the phrase. But it doesn’t look like MSI has blocked access o the SSD or fused it to the motherboard.

22 replies on “MSI Wind U115 tested, dissected in Polish”