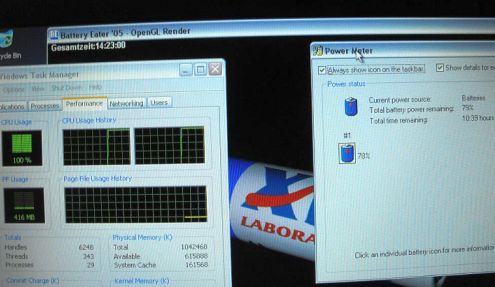 When MSI showed off the upcoming Wind U115 netbook at CES in January with a placard promising 10.5 hours of battery life,  I was a bit skeptical. But according to preliminary tests at Eee PC.de, MSI might actually have been modest.

Johannes at Eee PC.de is in the process of running a battery test. Around 4 hours in, the battery meter showed his battery power had dropped to just 79% and he had an estimated 10 hours and 39 minutes of power to go. In other words, it’s possible that the 5200mAh battery could run for over 14 hours on a single charge.

Later in the day, Johannes posted that the battery meter now shows that he has 47% of his power left, which should provide another 6 hours and 11 minutes of run time. Now, it’s possible that the meter is wrong and that the computer will die in the next few minutes. So check back later for the final results. But it looks like MSI has set a new bar for battery performance with the U115.

Update: The final verdict? The MSI Wind U115 ran for 13 hours and 15 minutes. It’s worth pointing out that this test was conducted with the WLAN turned off. I can’t quite imagine why you would want to run a netbook for 13 hours without connecting to WiFi. But Johannes plans to un a few more tests over the next few days. The test did utilize about 100% of his CPU for all 13 hours, so it’s not unrealistic to think that you could get 10 to 14 hours of battery life out of this netbook with WiFi turned on, the screen brightness dimmed, and the CPU running a bit slower.