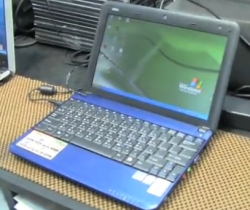 The MSI Wind U100 Plus is basically a modest upgrade to the classic MSI Wind U100. Both netbooks have the same keyboard, case design, and screen. But the Plus version has an ever-so-slightly faster processor. It replaces the Intel Atom N270 CPU with an N280 processor that runs at 1.66GHz and which has an FSB of 667MHz. The N270 chip runs at 1.6GHz and has a 533MHz FSB.

Last I heard, the Wind U100 Plus was set to begin shipping in Europe soon, but as Netbook News discovered recently, the netbook has already hit the streets of Taiwan.

It’s selling for the equivalent of about $400. Since it looks pretty much identical to the U100, there’s not really that much to see, but if you’re curious, you can check out a video after the break. Bear in mind, Sascha says the netbook has an Intel Atom N270 CPU, but I think that he misspoke. You just get so used to saying that number over and over, it’s hard to force the words “N280” out of your mouth sometimes.

2 replies on “MSI Wind U100 Plus spotted, toyed with on video”