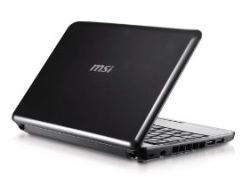 MSI released the Wind U100 mini-laptop in 2008. Like pretty much every other netbook launched in the second half of that year, it had a 10 inch screen, 1.6GHz Intel Atom N270 CPU, 1GB of RAM, 160GB hard drive and ran Windows XP.

Over the past year, MSI has released several updates to its Wind netbook line including the Wind U120, U123, U110, and U115. But THe MSI WInd U100 still remains popular… or maybe MSI just had a lot of spare units lying around waiting to be upgraded. Whatever the reason, it looks like MSI has given this venerable netbook a Windows 7 makeover.

The new model gets the same modest spec bump that most Windows 7 netbooks have received: While it still has 1GB of RAM, the new model has a 250GB hard drive. It runs WIndows 7 Starter Edition, and the new Wind U100 is available in two versions, one with a 1.6GHz Intel Atom N270 CPU and the other with a slightly faster 1.66GHz Intel Atom N280 processor.

The new models appear to be available in Europe right now, but I can’t find them in any US stores yet.