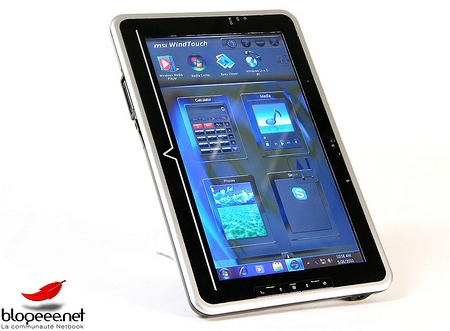 Sure, you’ve already seen some real world hands-on photos of MSI’s upcoming Wind Pad 100 tablet running Windows 7. But you know you want to see the glossy promo shots from MSI that show you exactly what the device makers want you to see and nothing else.

Well, if press shots are your thing, French news site Blogeee is the place to go for a few more like the one above. The tech blog managed to snag about 4 promotional shots of the Wind Pad 100.

Last I heard, the tablet sports a 1.6GHz Intel Atom Z530 processor and runs Windows 7 Ultimate. It has a finger-friendly program launcher, which you can see featured prominently in the press shots.

But it’s worth noting that while apps like this might make it easier to launch software on a touchscreen tablet, they rarely do anything to make the experience of using apps that were designed for a keyboard and mouse easier to use with your fingertips. I suspect Windows tablets won’t really take off until developers start to write third party apps that are really designed for touch, much the way that iPad and Android apps already are.