MSI’s newest mini-desktop is a PC that’s not much bigger than a DVD drive. But it’s a full-fledged Windows 8 computer with an Intel Sandy Bridge processor, a 2.5 inch drive bay, and support for up to 4GB of RAM.

The MSI Wind Box DC110 is already available in Germany for about 400 Euros. It’s expected to on sale in Italy and other countries soon as well. 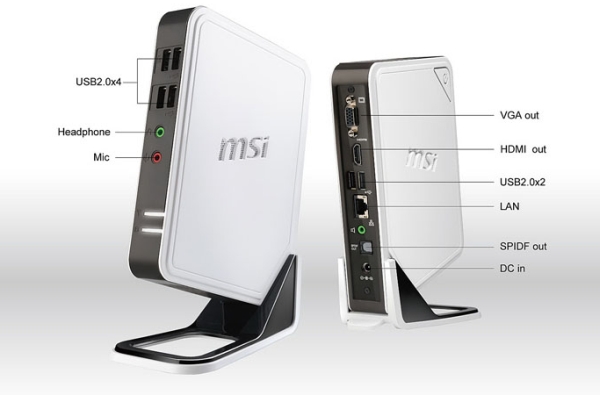 It has an Intel Celeron 847 dual core processor with Intel HD integrated graphics. While the 1.1 GHz processor isn’t exactly a top-of-the-line chip, it should pack enough power for HD video playback and most basic computing operations.

It’s also a relatively low-power chip: the Celeron 847 was initially designed as a notebook processor and it has a TDP of 17W. In fact the MSI Wind Box DC110 only needs a 40W power supply.

That could make this little desktop a decent choice for a home server, media server, or any other use that would require leaving the PC running 24/7, since it won’t use as much power as most desktop computers.