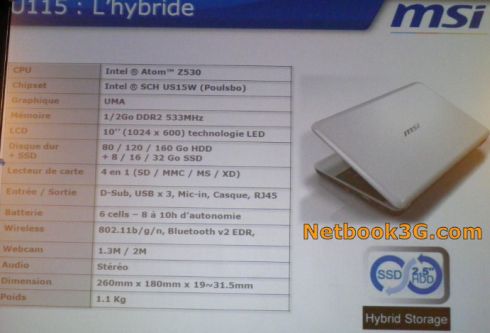 Netbook maker MSI is adding two new models to its lineup. The MSI Wind U100 is already one of the more popular netbooks on the market thanks to its 10 inch display and roomy keyboard. And it’s a favorite among hackintosh enthusiasts because it runs OS X reasonably well.

MSI had already announced plans to release an upgraded model called the MSI Wind U120, which will add a 3G HSUPA modem. But now the company is fleshing out its product line with a U110 model and a U115 netbook to boot.

The MSI WInd U115 is probably the most unusual of the bunch. It will have a new “hybrid storage” sytem comprised of both a solid state disk and a hard drive. The idea is that the operating system will be installed on the SSD, leaving plenty of room on the larger hard drive for programs and storage.

Solid state disks tend to be more durable since there are no moving parts, and in some cases they can have faster write read speeds than hard drives which helps load the operating system and launch programs more quickly. It’s not entirely clear what kind of SSD the MSI WInd U115 will use at the moment, so I can’t really comment on the speed. But this is the first time we’ve seen a netbook maker take this approach.