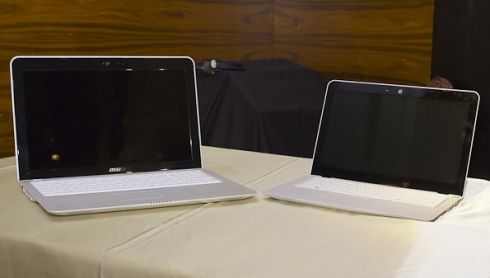 MSI plans to ship its line of X-Slim notebooks starting in April. Laptop Magazine reports that these thin and light machines with displays ranging from 13.4 inches to 15.6 inches will have starting prices around $700 to $750, which is pretty close to the price MSI was throwing around for the MSI X320 back at CES. But what’s new is the fact the MSI X340 will be one of the first laptops available with Intel’s new Consumer Ultra Low Voltage (CULV) processor.

Two versions will be available. One will use a low voltage Celeron M 725 chip, while the other will have a Core 2 Solo SU3500 CPU. The Celeron processor will run at 1.2GHz and have 1MB of L2Cache, while the Core Solo chip will have a clock speed of 1.4GHz and 3MB of L2Cache.  I’m assuming since these are part of the CULV series that they’ll draw less power than similarly specced chips and help provide longer battery life.

The CULV chips should provide better performance than the Intel Atom chips that are becoming ubiquitous in thin and light netbooks. But the CULV platform also requires more power, which means you probably won’t see CULV-powered notebooks with 8 to 9 hours of battery life unless they have ridiculously large batteries. Still, I can’t help but wonder whether we’ll start seeing CULV chips show up in 10 inch laptops soon. It’s clear that chip makers and laptop makers would like to have an excuse to charge higher prices for netbooks, and some consumers would probably be willing to pay a small premium for a faster device.