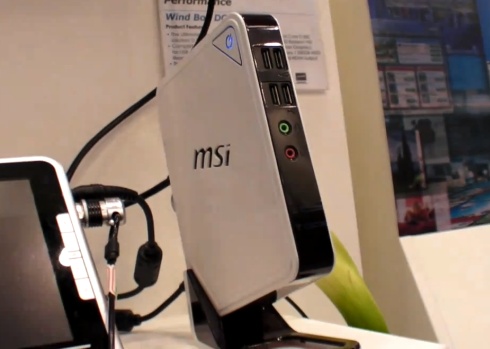 MSI has been cranking out low power mini-desktop computers, or nettops, for the past few years. Most of the computers in the MSI Wind Box line have had Intel Atom processors, giving you a desktop with netbook-like performance (and a netbook-like low price tag). But the company’s latest Wind Box packs a little more punch.

The nettop has 6 USB ports and VGA and HDMI output. It has a small form factor design and relatively low power consumption since the AMD E-350 chip has a TDP of 18W. That’s about twice what you’d expect from an Intel Atom chip, but around half of what you get from a typical notebook processor.

Charbax from ARMDevices spotted a demo unit at CeBIT this week. The case design hasn’t been finalized, but the Wind Box DC100 looks like something to keep an eye on if you’re looking for a low power machine with HD video capabilities.

You can check out a video after the break. Note that the ARMDevices article says the nettop is “potentially” a $200 device… but he sort of puts that number into the MSI rep’s mouth in the video. There’s no word on actual pricing for this computer, and it’s not entirely clear if it will ever make it to market.